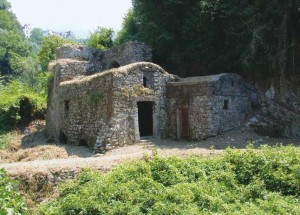 • the art of pasta and the gens grania

The residents of Gragnano have always had a talent for working with flour and making a business out of it. We can see this from archaeological digs which have unearthed huge ovens (like that in Via Carmiano), loaves found fossilized after the eruption of Vesuvius in 79 AD in Pompei ed Ercolano and branded with the letter G, for Gens Grania, the Roman family that gave its name to what is now known as the area of Gragnano. Moulds for flour, like those sculpted in the Etruscan tomb of Cerveteri have also been found in the Varano area, and were mentioned by archaeologist Michele Ruggiero in 1881 in his book entitled “Degli scavi di Stabia” in relation to the discovery of “moulds and other tools for making pasta; this industry being continued today, in another form and using different methods, in Gragnano, by grace (as they say) of the special nature of the water and air which, being similar to those on the Amalfi coast, produce pasta which tastes and IS better than that made anywhere else”.

It was the people of Amalfi, considering that Gragnano was part of the Marine Republic from the 9th to the 12th century, that laid the foundations for making pasta, initially supplying the technology for what we now call the milling art, which was active for centuries in the Valle dei Mulini (valley of mills of Gragnano), and then for making pasta, which the people of Amalfi had learned through their contacts with the Arabs and Sicilians.