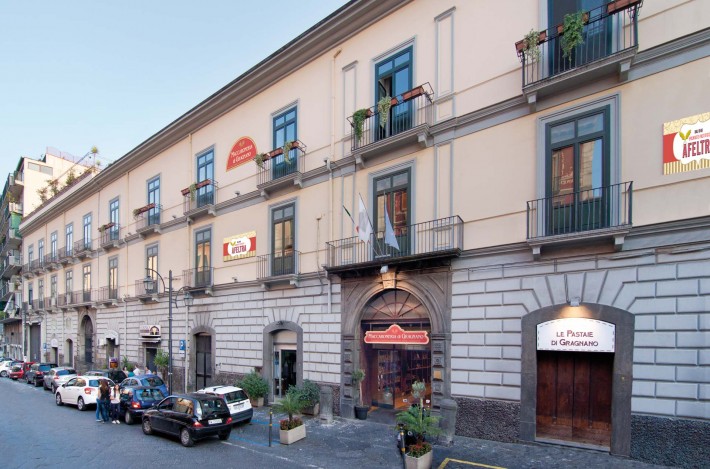 There have been numerous Afeltra pasta makers and the last name, which is still one of the most famous in Gragnano for the quality of his products, is that of Olimpio Afeltra. Today Afeltra pasta is considered to be a product for connoisseurs, so much so that it has been included in the Slow Food circuit. State-of-the-art machinery has replaced obsolete production systems, continuing to respect the times and methods that characterise the old Gragnanese tradition: a combination which was an immediate success. The pasta factory, a large and imposing building with majestic doors sculpted from Vesuvian stone, is located in the heart of Gragnano, along that via Roma portrayed in historical pictures, with the “spasa” of the pasta outside for drying in the sun, on terraces or in the street. In the mid-19th century, to favour the microclimatic conditions of the heliothermic axis and allow natural drying, the Municipality ordered the widening of the road and imposed strict restrictions regulating the height of the buildings, erected like a continuous curtain wall along both sides of the street. They almost all made long pasta, Gragnano’s speciality and the hardest to imitate. About forty pasta factories overlooked that road, named after Superintendent Sancio, thanks to whom the funds to build it were accumulated. The road was subsequently paved with very strong slabs made of Vesuvian basalt and embellished with several fountains, which were also used to water the animals that drew the heavy carts that brought in the wheat and took out the boxes of pasta from the town. To keep the street clean, the pasta factories took on the cost of having it swept constantly from 1832 onwards. When the railway opened in 1885, the industrial heart of Gragnano was connected to the station by a bridge across the River Vernotico, where the pasta heading to the port of Naples to be shipped to America and for rail deliveries all over Europe was loaded. The pasta industry in Gragnano was a fortunate combination of microclimate, also favoured by the purity of the water that bubbles up from the numerous springs in the Lattari Mountains, the knowledge of flours which have been milled for centuries in the Valle dei Mulini (valley of mills), the farsightedness of public authorities that issued numerous orders during the 19th century to encourage the growth of this activity and, last but not least, the skill of entire generations of pasta makers, businessmen and factory workers who, with passion and sacrifice, have made a perfect product, improving the quality day by day, generation by generation, making it an Art. That Art of Pasta which is synonymous with Gragnano, the Home of Pasta.