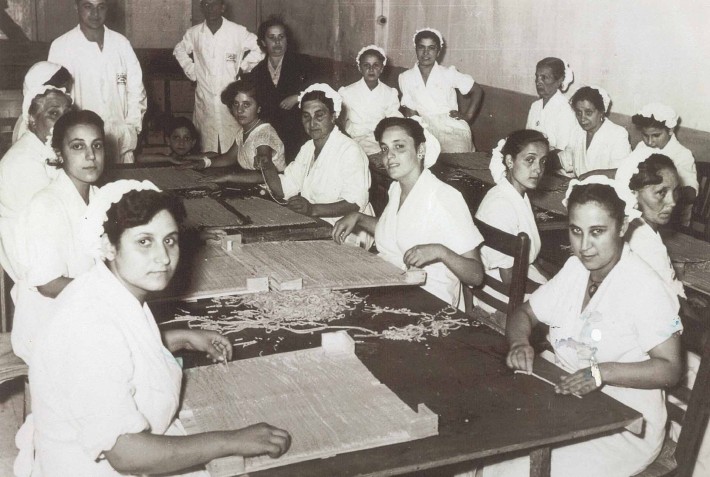 Premiato Pastificio Afeltra was established way back in 1848, when processing pasta was the mainstay of Gragnano’s economy. Naples and the Kingdom of the Two Sicilies were still under the rule of the Bourbons and pasta-making was a flourishing activity in Gragnano. Ferdinand II of Bourbon, who enjoyed the good life and was partial to excellent food, visited Gragnano with his second wife Maria Theresa Archduchess of Austria, to taste the famous maccheroni made by Pastificio Afeltra. «One maccherone is worth a hundred spaghetti» seems to have been his comment after tasting them.

The ancient via Roma, now the centre of the Old Town, was, at that time, the pasta makers’ road, and it began from the Trivione and ended at the Conciaria. It was redesigned and widened for an important reason: to allow the pasta factories to fully exploit the sun’s warmth and light, as well as the breezes blowing in from the sea or from the Lattari Mountains, during the slow drying of the pasta hung out along the street.

In 1872 the Town Councillor, Notary Raffaele Dello Joio, was able to proudly boast: “Gragnano is the town of a hundred long pasta factories, the town of industry and of timber, the town rewarded in the latest Italian and foreign exhibitions for industrial and farming products, even winning gold medals, the town which sends its products to every part of the globe.”
In 1885, during the period of rule by the Savoys, a new piece was added to the puzzle of Gragnano’s industrial development: the construction of the railway line connecting it with Naples. Gragnano pasta could now easily reach every location.

With the arrival of the First World War, considerable changes were made, first with the ban on exporting pasta abroad, which ended extensive trade with the USA, the main customer of Gragnano’s pasta factories. More severe difficulties came about for the pasta-making industry with economic sanctions by the Society of Nations in 1935, following Italy’s aggressive policy in Africa, which made it almost impossible to procure durum wheat from Russia and America.